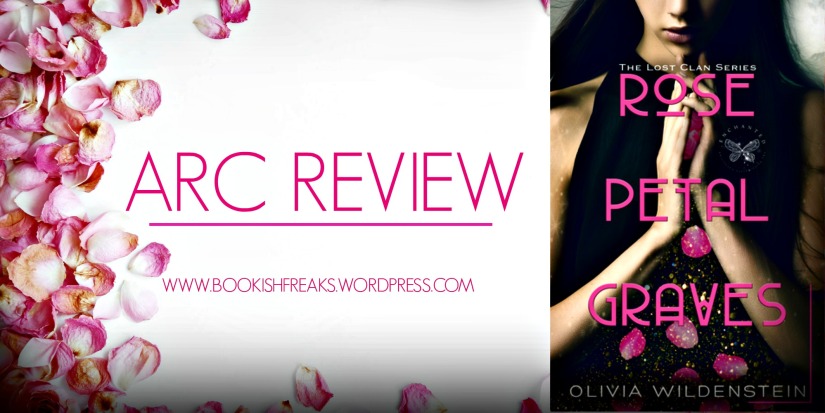 I recieved this book for free from the publishers in exchange for an honest, unbiased review.

There. I did it again. I fell for a book with a pretty cover, and now I want back the 6 precious hours of my life I wasted reading a book with loosely tied plot, an irritating and selfish protagonist, and unrealistic bland characters I couldn’t care less about.

The Writing: I have never read any of Wildenstein’s books before, but in Rose Petal Graves, her writing was pretty good. Not great, but not mediocre or even downright awful. The pacing was just slightly fast but it did keep you turning the pages to see what happened next, and the descriptions were minimal but on point. It was easy to get into the story, because of the writing, and I loved the cold, dark vibe of the overall story and the way it unfolded. And yes, despite the other flaws of the book, which I will discuss in details very soon, there was a lot of suspense in the story, which is probably the only reason why I didn’t DNF it.

Another thing that I did like about the story is how action packed it was. There was always something going on. But these are the only good things about this book. Even for purely entertainment purposes, this book fails to deliver and by the time you reach the very last page you cannot help but wonder what made you pick up this book in the first place.

The Characters: Let’s start with our protagonist, Catori (Cat for short), shall we? Our very angry, very annoying, very selfish protagonist, a self-proclaimed skeptic who believes everything anyone tells her without even doubting them for more than three seconds. Her naivety not only had me gaping at every turn, but also made me question her intelligence and maturity as a college going student. Throughout the whole book, it was a question of who is the villain–the fey or the fey hunters–and the way she kept swinging back and forth like a pendulum in her opinions about both parties gave me a headache. It’s not simply that she was indecisive, but rather how she seemed to pass judgement without even pausing to think rationally that really bothered me. And all her talk about how she did not trust the faeries or even her ancestors was just total bogus because her actions proved otherwise. If there’s one thing I do not like, its characters who do the exact opposite of what they claim to be doing.

This happened a lot with Cat, and not just in case of her feelings about fey or fey humters. For example, when the love interest Cruz suggests taking down her late mother’s beloved windchime (because it was preventing him from entering her house) she refuses to do it because it was something that belonged to her mom. Yet, not even five minutes later, not only does she take it down but she also throws it into the trash like it belonged there.

I mean, didn’t you just say you didn’t want to take it down because it belonged to your mother?

I also really hate characters who are unreasonably rude and uncaring towards their loved ones, and then be like “oh why is everyone so mean to me? what did I do to deserve this?” While it wasn’t hard to understand that Cat was going through a difficult time what with her mother having just died in the very beginning of the book, but her behavior with her father–who is also grieving–really put me off of her. She claimed to be taking care of him and being concerned about his well-being but when it came to actually doing those things she did the exact opposite. For instance, when she finds out that her father has overindulged in alcoholic bevarges in a state of utter despair and grief and consequently throws up in the backseat of his car, she makes her friend dump him on the sofa instead of helping him carry her father to his bed and do something the next day to help him with his hangover. Very caring indeed.

I am not even going to bother about the other characters in the story, cause they were all so bland and did not seem to have any purpose in the story. Even the love interest, the swoon-worthy Cruz, was about as interesting as a wall. I also didn’t understand the purpose of there being a character who was a survivor of IED blast. Was it to add diversity? If that’s the case then the writer truly failed because the only purpose that character had(I can’t recall his name thanks to how forgettable this story was) was to be hopelessly in love with Cat and act all jealous and grouchy when Cat spent time with Cruz.

The only character who even remotely piqued my interest was Cat’s fey hunter ancestor Gwenelda but she had so few appearances that there really isn’t much to say about her.

The Plot: I’ll admit that I have only read three faerie stories besides this, Julie Kagawa’s Iron Fey series, Melissa Marr’s Wicked Lovely, and Lauren Bird Horowitz’s Shattered Blue, so my knowledge about faeries is limited to what I have learned from these books and from Google. Still, I liked the way faeries were portrayed in Rose Petal Graves, I wouldn’t quite say it was unique but it was certainly different. The main concept of the story, with the addition of Native American mythology, truly had a lot of potential, and yet I couldn’t help but think that the plot needed more planning and definitely better execution. The romance was truly unnecessary, not to mention, unconvincing due to the lack of chemistry between the characters. To sum it up, I’d say that the premise of the book was truly interesting, but the plot needed more than good concept to make this book reach the potential it had.

The Ending: Now I am aware that this book is a novella, and in the writer’s own words, an “appetizer” to the rest of the books in the series. Maybe that’s why she felt the need to add a cliffhanger in the end, which would have been fine, if the cliffhanger didn’t come so suddenly and was written in a better way. Ending a book with suspense is not a bad idea, if the writer can avoid making it seem abrupt, which Wildenstein unfortunately couldn’t do. Suffice to say, the ending did not tie up the book and neither did it make me want to read the next book to find out what happened next.

If this book could gain some points from an entertainment perspective, perhaps I would have given it another coffee cup. Sadly, despite the creepy, underlying darkness of the book, the story itself does not provide anything in terms of entertainment, and from a critical analysis this book needs more character and plot development. Therefore I recommend you stay away from this one, ignore the pretty cover and instead pick up Iron Fey or Shattered Blue if you want unique faerie stories, or Wicked Lovely for those looking for a more traditional faerie story.